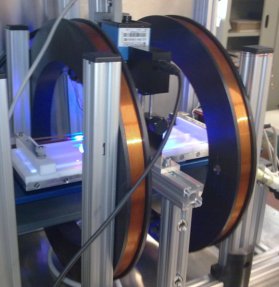 The instrument is designed to measure the mechanical response of a Langmuir monolayer to an external shear deformation. The instrument is a custom-made apparatus analogous to the one recently developed by the group of Gerald Fuller [@Brooks1999 @Reynaert2008].

The stress exerted by the needle on the film is equal to the shear oscillating force (with amplitude $F$), divided by two times the length $L$ of the magnetic needle. The resulting shear strain $\gamma$ is equal to the needle oscillation amplitude $X$, divided by the distance $W$ between the needle and the channel that delimits the investigated portion of the film. The oscillations of $\gamma$ and $\sigma$ are separated by a phase lag $\delta$. The dynamic modulus is then given by:

This experimental technique presents some limitations, related to its intrinsic design. A measurement performed on a film characterized by a low value of $G$ may be strongly affected by contributions from the drag of the water subphase. At the same time, the technique is not suited to measure the response of very rigid films: the high force required to move the needle may induce undesired non-linear effects in the measurements of $G$. 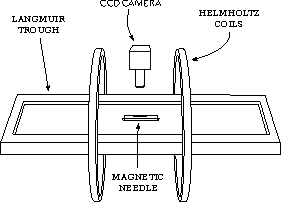 where $\eta_s$ and $\eta_b$ are the viscosities of the film and of the subphase, $A$ and $P$ are the area and the perimeter of the contact region between the needle and the film, $L_s$ and $L_b$ are the lengths over which the velocity fields vary in the film and in the bulk. Depending on the value of $B$, three regimes can be roughly identified: