We studied bulk polycrystalline In1-xMnxSb with x=0.01, 0.02, and 0.0265, which display ferromagnetism above room temperature.

The starting materials used were single crystal ISE-2”v” n-type indium antimonide (77-K electron concentration and mobility of 2·1014 cm-3 and 5·105 cm2/(V·s), respectively), and 99.9%-pure Mn, Sb. The polycrystalline solid solutions In1-xMnxSb were synthesized in evacuated quartz ampules under isothermal conditions throughout the length of the ampule. The samples were melted at 800oC for 2 h, followed by cooling to 550oC and solidification under nonequilibrium conditions. More details on the sample preparation and characterization can be found elsewhere.[1, 2]

NMR spectra were collected with the home-built broadband fast-averaging NMR spectrometer HyReSpect on a tuned probe circuit in conjunction with superconducting magnets capable of fields up to 9 T. Frequency swept spin-echo of 55Mn, 121Sb, and 123Sb in the range 180 - 450 MHz were acquired at different temperatures both in zero external field and in applied external fields. The field-swept NMR of the 121Sb, 113In, and 115In isotopes in the diamagnetic background were performed at 100 K. The NMR spectra were obtained by Fourier transforming two pulse sequence. The spectra are always corrected for NMR sensitivity, rescaling their amplitudes by ω2. 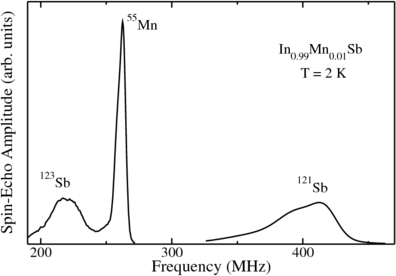 Figure at right shows the NMR spectra of the In1-xMnxSb sample with x=0.01 measured in zero external magnetic field at low temperature. We detected three distinct resonance lines centered at around 223 MHz, 260 MHz, and 411 MHz. Very similar spectra were found in the samples with higher Mn concentration as well. The position of these lines do not depends on the Mn content. The ratio of two resonance frequencies 411/223 MHz is equivalent to the gyromagnetic ratio, 121γ/123γ=1.84. Therefore two peaks arise from 121Sb and 123Sb with the same internal hyperfine field. The existence of the resonance in zero external magnetic field and low applied radio-frequency power, due to the enhancement of the radio-frequency field by domain wall motion, confirm that the samples are in the ferromagnetic ground state. However, these spectra are extremely similar to those measured in magnetic hexagonal MnSb,[3,4] in which the line centered at 223 MHz is assigned to 123Sb NMR, whereas 121Sb isotope displays a broad peak around 411 MHz. Finally the sharp line close to 260 MHz is attributed to 55Mn.

For magnetic atoms or ions the main contribution to the local field on the nuclei comes from the spin polarized bound and collective s-electrons. Their spin polarization arises from the exchange interaction with ordered electron spins. Moreover, in the magnetic materials due to the collective electrons and the overlapping of wave functions of the adjacent atoms, the spin polarization is transferred from the magnetic ions to the nonmagnetic atoms given rise to the hyperfine fields of the Fermi-contact origin on their nuclei. Therefore, the NMR frequency of magnetic and nonmagnetic ions in zero magnetic field strongly depends on the magnetic and conducting state of the magnetic compounds. MnSb is an intermetallic compound with a hexagonal NiAs-type structure, while In1-xMnxSb is a magnetic semiconductor of zinc blende structure. It means that the spin state of bound and collective s-electrons in MnSb is quite different from that of In1-xMnxSb. Hence, if Mn atoms randomly replace In ions in the semiconductor matrix InSb, the 55Mn and 121(123)Sb resonance frequencies must be different from those of MnSb. However the obtained 55Mn and 121(123)Sb spectra of In1-xMnxSb are identical to those of MnSb (see Figure), indicating that the observed spectra of In1-xMnxSb clearly arise from MnSb magnetic clusters formed inside the semiconductor matrix. 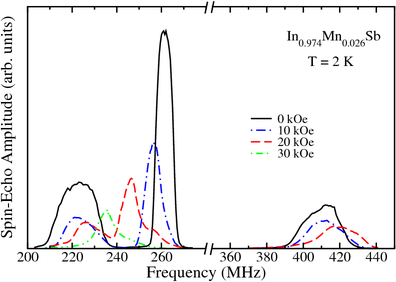 This assignment is also confirmed by the shifts of the NMR peaks in the applied magnetic field. Figure at left displays 123Sb, 55Mn, and 121Sb spin-echo spectra for In1-xMnxSb with 2.65% Mn measured at different external magnetic fields. Both lines at 217 MHz and 400 MHz are shifted towards high frequencies, indicating a positive hyperfine field on Sb ions, i.e. parallel to the magnetization, whereas the line at 260 MHz is shifted towards low frequencies, as expected for the negative hyperfine field on Mn ions. The intensity of all the peaks is reduced with respect to the zero field spectra, a behavior characteristic of ferromagnetically enhanced NMR lines.

An absence of any other magnetic Mn resonance line reveals the phase separation of the In1-xMnxSb samples into InSb and MnSb. Therefore, the MnSb phase is dominant in the bulk In1-xMnxSb compounds and most manganese atoms reside within MnSb clusters rather than randomly substitute the In ions in the InSb host as it is expected in DMS. This result indicates that the room temperature ferromagnetism of these samples originates from the ferromagnetic metallic phase. 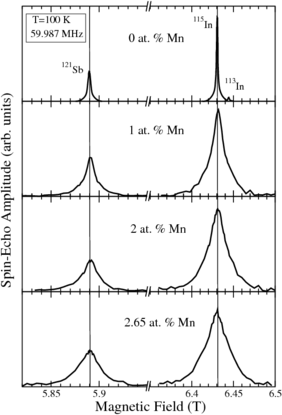 We also observed the NMR of 121Sb and 113(115)In isotopes located in the diamagnetic InSb phase of the phase separated In1-xMnxSb alloys. Figure at right shows field-swept spectra of In1-xMnxSb alloys as a function of Mn concentration, taken at the frequency of 59.987 MHz and at T=100 K. The NMR spectrum of the undoped InSb exhibit a set of lines centered at 5.8895, 6.4309, and 6.4442 T, corresponding to the 121Sb, 115In, and 113In, respectively. The 123Sb resonance was not seen, presumably because it was too weak and too broad. The 113In line in the spectra was detected only in the undoped InSb. One can expect that if the Mn ions randomly substituted the In ions in the InSb matrix, the presence of the magnetic impurities in the lattice would either have a large effect on line shifts of the InSb host or result in the new resonance lines, due to the hyperfine interactions. However, as can be seen in Figure at right both 121Sb and 115In lines in the spectra are not shifted relative to the reference lines in the spectra of undoped InSb. Our measurements of the resonance at different temperatures reveal that the frequencies of the 121Sb and 115In NMR do not depend on the temperature. 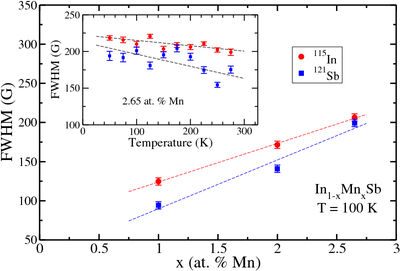 On the other hand, as the Mn concentration increases, all the lines become broader. For example, in 1% Mn doped InSb the linewidths are of the order of 100 G, compared to 10 G for pure InSb. In the Figure at left the magnetic impurity dependence of the full width at half-maximum of the 121Sb and 115In lines measured in the In1-xMnxSb sample with 2.65% Mn at 100 K and fixed frequency 60 MHz are shown. The inhomogeneous broadening is linear in the dependence on the concentration (see Figure at left) and on the temperature at the wide interval of temperatures (see inset of Figure). Such broadening of the 121Sb and 115In lines can be ascribed to the spatial fluctuations of the local dipolar field. The dipolar contribution to the local field of the 121Sb and 115In nuclei from the numerous randomly distributed magnetic clusters of MnSb in the InSb host matrix will result in an overlapping array of very closely spaced resonances whose envelope is the broadened line with the Lorentzian shape. These facts also indicate that the magnetic impurity does not go into solution.