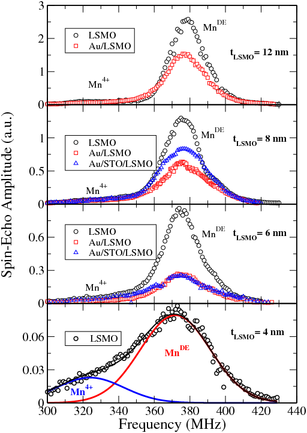 Figure (for tLSMO=4 nm solid lines represent a best two components fit) shows the 55Mn NMR spectra that we collected from several heterostructures with and without the gold overlayer. In all spectra at least two distinct lines at f4+≈322 MHz and fDE≈376 MHz are observed and may be attributed to two different strain induced phases with the localized charges (Mn4+ state) and with itinerant carriers (MnDE state), respectively. As can be seen the intensity of fDE peak (the area under curve) scales with the film thickness, and it is expected to vanish for a LSMO thickness corresponding to the dead-layer, whereas the intensity of the peak at f4+ is practically unvaried. Note: the thickness of the dead-layer in LSMO/STO roughly coincides with the critical thickness of the order of 3 nm below which the manganite films appear to be insulating.

The spectra of the LSMO films terminated with Au capping also reveal two resonance lines at the same frequencies f4+ and fDE (red squares in Figure). If an oxygen deficiency took place in Au/LSMO heterostructures, the positions of these resonance lines would be different. An oxygen deficiency decreases the Mn4+ concentration and affects the crystal lattice, reducing the transfer interaction of eg electrons and weakening the ferromagnetic double exchange interactions, and, hence, is expected to have an influence on the hyperfine interactions of manganese ions, which can be measured by NMR. The expected hole concentration (Mn4+) is given by simple relation c=0.33-2·δ so assuming the oxygen vacancies δ = 0.05 (it corresponds to ΔTc ≈ 60 K in the case of LSMO) we find that c is of the order of 0.2. However, such hole concentration gives rise to the different zero-field 55Mn NMR spectra.

On the other hand, because the intensity of the NMR line is proportional to the number of the nuclei in the specific electronic and magnetic state, the changing of the Mn3+/Mn4+ ratio due to the presence of the gold layer can be measured by NMR directly. As can be seen in Figure a marked reduction of the fDE signal is found, indicating that the capping layer has a direct influence on this specific electronic state (double exchange state) of the manganite film. The spectroscopic sensitivity of NMR allows us to detect quite a large effect already on the thickest 12 nm structures. The reduction is percentually larger for thinner films, as it would be expected in the case Au induces a constant finite thickness depletion layer in LSMO. For the case of the 4 nm thick LSMO film with the gold capping the zero-field NMR signal is beyond the sensitivity of our NMR spectrometer and was not detected revealing that major part of the LMSO film might be in the disordered state.